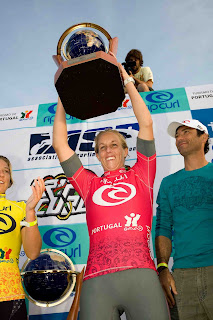 Chelsea! Great result lifting her up on the ratings !

Chelsea trains with Brodie Ledgerwood at CHEK Australia. After leaving the tour to have her baby girl Meika in 2008 Chelsea is back in great form!

For Hedges, today’s return to form marks the first time the inspiring goofy-footer has seen a Finals’ berth since 2007, and moves her from 8th to 6th on the 2009 ASP Women’s World Tour ratings. Her dominance in the earlier rounds of the Rip Curl Women’s Pro Search cannot be overlooked as she consistently dominated the playful pits of Belgas, even eliminating reigning two-time ASP Women’s World Champion and current ASP Women’s World No. 1, Stephanie Gilmore (AUS), 21, in the Quarterfinals.

Posted by CHEK Australia at 3:49 PM
Email ThisBlogThis!Share to TwitterShare to FacebookShare to Pinterest