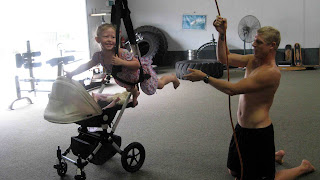 With the Quiksilver Pro due to start on Saturday, Mick Fanning has been training hard. Here is was caught having some fun with Jan Carton's grand daughter Ebony. 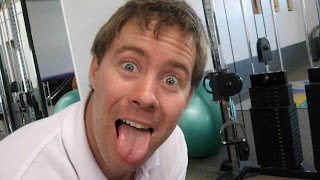 Brodie Ledgerwood from GC strength and Conditioning has some great classes and programs to offer. Brodie has just completed Charles Poliquin Level 1 and 2 PICP and Biosig Level 1. He has gone a bit crazy in this photo after all the study!
Posted by CHEK Australia at 8:42 PM 2 comments:
Email ThisBlogThis!Share to TwitterShare to FacebookShare to Pinterest 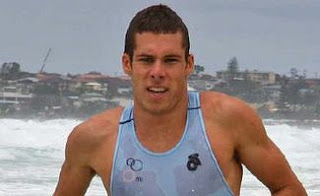 BANORA Point triathlete Taylor Cecil blitzed the field to take out the Queensland Triathlon Series race at Caloundra on the Sunday the 7th of Feb.

Cecil produced a solid 400m swim, backed that up with a competitive 15km cycle before dominating the 4km run to claim one of the most convincing triumphs of his young career.

Cecil was armed with a promising mindset for Sunday as he has a strong support from dynamic coaching duo Jan Carton (nutrition and strength) and Justin Drew (triathlon).

Cecil said he had been coached by Carton since May 2009 at Burleigh and had found her nutrition and mental techniques immensely beneficial.

“A lot of people don’t realise the importance of core and mental stability and racing with mental toughness,” Cecil said. “When everyone is at the same level of fitness, the winner will be the one who is toughest in the head.

“Jan has also helped Mick Fanning and Stephanie Gilmour, so it is great to have her assisting me.”